Why use Hadoop? Any other solution to Large-Scale Data ? 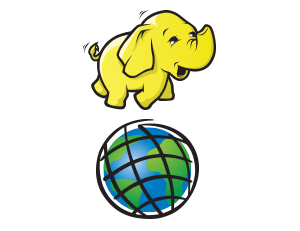 Hadoop is a large-scale distributed batch processing infrastructure. While it can be used on a single machine, its true power lies in its ability to scale to hundreds or thousands of computers, each with several processor cores. Hadoop is also designed to efficiently distribute large amounts of work across a set of machines.

How large an amount of work? Orders of magnitude larger than many existing systems work with. Hundreds of gigabytes of data constitute the low end of Hadoop-scale. Actually Hadoop is built to process "web-scale" data on the order of hundreds of gigabytes to terabytes or petabytes. At this scale, it is likely that the input data set will not even fit on a single computer's hard drive, much less in memory. So Hadoop includes a distributed file system which breaks up input data and sends fractions of the original data to several machines in your cluster to hold. This results in the problem being processed in parallel using all of the machines in the cluster and computes output results as efficiently as possible.


Performing large-scale computation is difficult. To work with this volume of data requires distributing parts of the problem to multiple machines to handle in parallel. Whenever multiple machines are used in cooperation with one another, the probability of failures rises. In a single-machine environment, failure is not something that program designers explicitly worry about very often: if the machine has crashed, then there is no way for the program to recover anyway.

In a distributed environment, however, partial failures are an expected and common occurrence. Networks can experience partial or total failure if switches and routers break down. Data may not arrive at a particular point in time due to unexpected network congestion. Individual compute nodes may overheat, crash, experience hard drive failures, or run out of memory or disk space. Data may be corrupted, or maliciously or improperly transmitted. Multiple implementations or versions of client software may speak slightly different protocols from one another. Clocks may become desynchronized, lock files may not be released, parties involved in distributed atomic transactions may lose their network connections part-way through, etc. In each of these cases, the rest of the distributed system should be able to recover from the component failure or transient error condition and continue to make progress. Of course, actually providing such resilience is a major software engineering challenge.

Different distributed systems specifically address certain modes of failure, while worrying less about others. Hadoop provides no security model, nor safeguards against maliciously inserted data. For example, it cannot detect a man-in-the-middle attack between nodes. On the other hand, it is designed to handle hardware failure and data congestion issues very robustly. Other distributed systems make different trade-offs, as they intend to be used for problems with other requirements (e.g., high security).

In addition to worrying about these sorts of bugs and challenges, there is also the fact that the compute hardware has finite resources available to it. The major resources include:

Individual machines typically only have a few gigabytes of memory. If the input data set is several terabytes, then this would require a thousand or more machines to hold it in RAM -- and even then, no single machine would be able to process or address all of the data.

Hard drives are much larger; a single machine can now hold multiple terabytes of information on its hard drives. But intermediate data sets generated while performing a large-scale computation can easily fill up several times more space than what the original input data set had occupied. During this process, some of the hard drives employed by the system may become full, and the distributed system may need to route this data to other nodes which can store the overflow.

Finally, bandwidth is a scarce resource even on an internal network. While a set of nodes directly connected by a gigabit Ethernet may generally experience high throughput between them, if all of the machines were transmitting multi-gigabyte data sets, they can easily saturate the switch's bandwidth capacity. Additionally if the machines are spread across multiple racks, the bandwidth available for the data transfer would be much less. Furthermore RPC requests and other data transfer requests using this channel may be delayed or dropped.

To be successful, a large-scale distributed system must be able to manage the above mentioned resources efficiently. Furthermore, it must allocate some of these resources toward maintaining the system as a whole, while devoting as much time as possible to the actual core computation.

Synchronization between multiple machines remains the biggest challenge in distributed system design. If nodes in a distributed system can explicitly communicate with one another, then application designers must be cognizant of risks associated with such communication patterns. It becomes very easy to generate more remote procedure calls (RPCs) than the system can satisfy! Performing multi-party data exchanges is also prone to deadlock or race conditions. Finally, the ability to continue computation in the face of failures becomes more challenging. For example, if 100 nodes are present in a system and one of them crashes, the other 99 nodes should be able to continue the computation, ideally with only a small penalty proportionate to the loss of 1% of the computing power. Of course, this will require re-computing any work lost on the unavailable node. Furthermore, if a complex communication network is overlaid on the distributed infrastructure, then determining how best to restart the lost computation and propagating this information about the change in network topology may be non trivial to implement.
Posted by Dipayan Dev at 10:05 AM

Email ThisBlogThis!Share to TwitterShare to FacebookShare to Pinterest
Labels: Hadoop